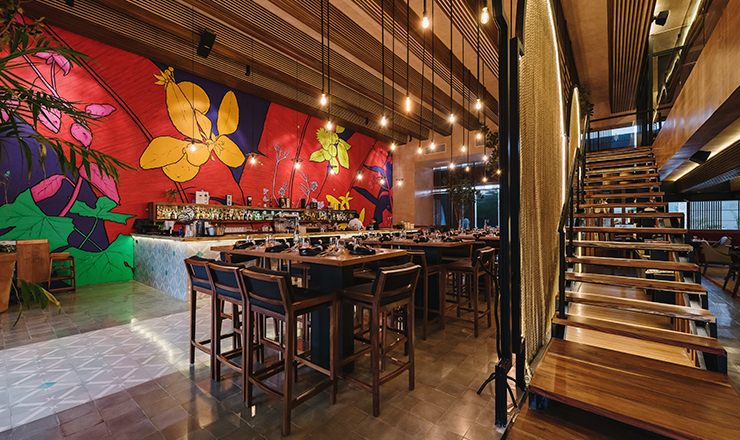 Teya was founded in 1683 by Ildefonsa Antonia Marcos Bermejo Calderón y de la Helguera, the wife of the Count of Miraflores. The name Teya means chicozapote tree and there are many of these types of trees on the grounds. It had been used as a livestock plantation for nearly two centuries until the great henequen boom came to the Yucatan Peninsula.  During the 17th century, Teya was one of the largest and most profitable haciendas in Yucatán. However, at the beginning of the 20th century, as the henequen boom started to slow down, many of the haciendas--including Teya-- were abandoned. The wealthy owner’s family saw them as just one of their many properties. The families of the hacendados were much more interested in the real estate in the cities and the newer, modern life. Come to find out years later by Cardenas’s grandson, Bernardo, who now runs Hacienda Teya, that at one point Teya had even been gambled away in a card game!

When Don Cardenas acquired the land, he first used the old property for his small furniture factory until 1995 when business slowed. He decided to try his hand at a restaurant to bring some business back,  starting with just five tables and serving traditional Yucatecan food. Word spread that the old Hacienda Teya was making some incredible food. The restaurant and its reputation prospered.

As I sat down last week with Bernardo Fernandez, Don Cardenas’ grandson, he recounted the history of Hacienda Teya with a sense of pride and a hint of nostalgia.  Bernardo was his grandfather’s eldest grandson and spend a lot of time with him at the hacienda. His grandfather would take him around and show him how everything worked. He said he basically grew up in the Teya kitchen. Over the years, Don Cardenas envisioned Teya as a tourist center. He built a large party hall for weddings and events and he had ideas for gardens, horseback riding and possibly even a hotel. He built a small pyramid and discovered a cenote on the land. He was a man ahead of his time and had his own recycling plant where he would crush up the glass that he no longer used and sell it. Bernardo remembers hearing the crush of the machine and not having any idea what it was and now, of course, he understands his grandfather was a pioneer in what is now known as the green movement.

After his grandfather passed away, Bernardo’s mother Carolina took over the hacienda positioning it even more as a must-visit place in Yucatan for incredible food and to hang out for the day. About four years ago as Carolina went on to other endeavors, Bernardo became the general manager of Teya which by now was a household name in Yucatan. He came up with new ideas for the business and how he wanted to expand and make Teya into more of a tourist attraction where they could learn about the local traditions of the hacienda.  He envisioned organic gardens, a large compost, the Teya forest of local trees, a recycling plant, a commissary and possibly even a hotel.

He excitedly told his family of his plans and his mother looked at him and smiled and told him to follow her to his grandfather’s den. There in the first drawer of his office was a piece of paper where Don Cardenas wrote down all the ideas he had for the hacienda. What Bernardo had just told his family had all been written down on that paper that was kept in the first drawer of his grandfather’s desk for over ten years. Bernardo realized that all those days walking the premises of Teya with his grandfather he had been hearing these ideas over and over; however, he was so young he didn't remember. In honor of his grandfather and the legend their family created by bringing Hacienda Teya back to life, he set into motion all the plans that his grandfather had only dreamed of.

Hacienda Teya continues to be a principal destination for great Yucatecan food. They have built a highly sophisticated commissary kitchen where they can maintain quality assurance for all the food that they make including that silky flan that I die for every time I go. And in the works are organic gardens, a full recycling area, Teya forest, and uncovering the cenote for swimming. They want to make it into both a local and foreign tourist attraction.

He also spoke of his latest endeavor Teya--Gastronomia Yucateca Viva which is located in Paseo 60. It serves Yucatecan food but with a contemporary twist to the menu. They brought in Chef Roberto Solis who is a pioneer in “the new Yucatecan cuisine” to add some Teya Viva original dishes using traditional ingredients and prepared in a creative way. They have an incredible selection of wines and high-end spirits as well as a wide selection of mixology drinks including one I tried last week. It was a version of the Xec Mayan salad with sticks of jicama, carrots, and radish in a lime-based mezcal drink brought out in a coconut shell over dry ice. The presentation was spectacular and the taste was great--plus you don’t feel bad for indulging in a drink if it is actually kind of a salad! As you walk in you can smell the enticing aroma of the precious wood that lines the ceilings and graces the furniture. There is a large red and colorful mural that blankets an entire wall where you can see many of the native plants of Yucatan, especially those used in the elaborate traditional dishes. There are several terracotta pots with henequen plants placed throughout the interior of the dining area. It is a new chic experience that is firmly based on the cultural traditions of the original hacienda. It is one of my favorite places to dine.

In the next month, Teya will be opening a new restaurant in Santa Lucia, one of Merida’s most popular plazas for fine dining. And 2020 has many new endeavors, so we’ll have to wait and see. What started out as abandoned land traded for an old dodge way back in 1974, has flourished into a family business spanning three generations and earning a place in the hearts of Yucatecans and foreigners alike.

The Living History of Hacienda Teya

In 1974, Don Jorge C. Cárdenas Gutiérrez found a large piece of land with an abandoned hacienda in the perfect location--close to the highway to Cancun. He was a furniture craftsman and he wanted to put his furniture-making workshop there so it was easy to take his pieces to Cancun where the sales were good. The owner of the property was willing to make a trade for the land, and Don Cardenas walked away with a deal he couldn’t pass up.  He swapped his 1975 green Dodge Dart for what he later made into one of Yucatan’s splendidly restored haciendas: Hacienda Teya.