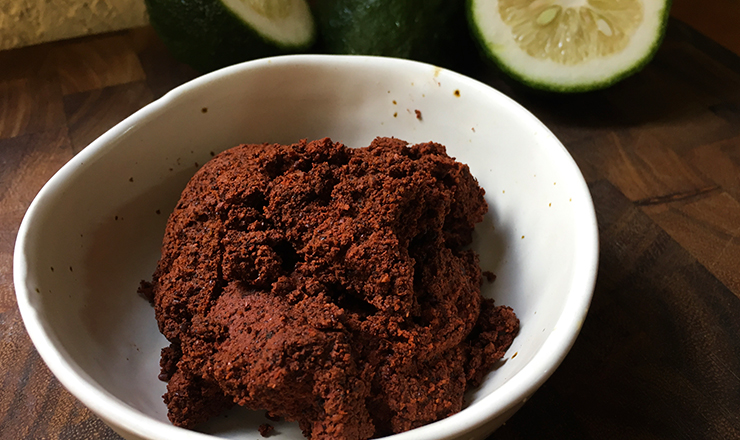 Another little known benefit of Axiote is that it’s also packed full of antioxidants, vitamins and minerals.Two of the highlight minerals contained in Axiote are calcium and folate. Calcium of course is knowm to help strong bones, and adding axiote to any diet--especially the vegan one--is a good idea. Secondly, folate is required in pregnancy and many women are advised to eat folate-rich foods. Folate isn’t only for pregnant women, it is a B vitamin and all the B vitamins are necessary in human health to prevent fatigue, headaches and help muscle development. Folk medicine also says axiote paste is used to cure upset stomachs, especially those caused by spicy food. I can easily guess why they Maya's included it in their diet alongside chili habaneros.

It is the seeds of the Axiote plant that are ground and used in the paste we cook with, but the bushy tree grows easily throughout the Yucatan and there are many other medicinal used for the leaves and fruits. I’ve been told boiling the leaves and laying them on your forehead and temples may help reduce fever. Likewise, leaves and various parts of the plant can be used to make a wash for wounds as Axiote is known to be antimicrobial as well. 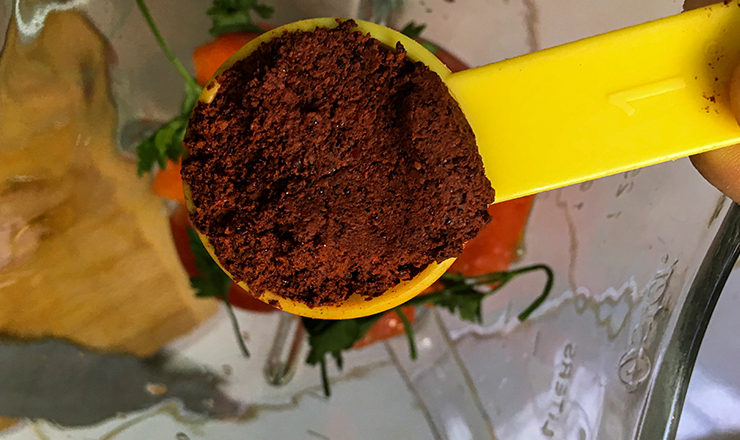 Sour/Bitter Orange is the acid in a dish you didn’t know you were missing. Lime has its own place, but naranja agria is a bittersweet taste that some count as the most potent citrus fruit. I have come to love bitter orange in lemonade and many of my stir-fries and salsas. This citrus fruit is also known as Seville orange and is most commonly used worldwide as marmalade because of it’s higher pectin content.

Other than the distinct flavor balance, it is a staple in Yucatecan food. Most of the traditional dishes and salsas are made with bitter orange and not lemons or limes. Again we can not make true cochinta without naranja agria, and the same goes for Poc Chuc.

Don’t be fooled, bitter orange is not native to Central America and actually comes from Asia where it has a long standing tradition in Ayurvedic medicine and other beauty products such as perfumes (there is a lot of interesting history around bitter orange use) and in modern day candy the scent and flavor remains widely popular. The leaves and flowers are highly prized in therapeutic herbology for their antidepressant, antimicrobial and energy boosting functions. At the same time, the juice is also a powerhouse of nutrition.

What are the health benefits of adding sour orange to your dishes? Bitter oranges are high in Vitamin C, higher in fact than sweet oranges. At the same time they have notable levels of magnesium and iron. There is also some calcium and some vitamin A in bitter oranges. In general they are a good citrus fruit to add into your diet, but I would not suggest trying to eat them plain.

This is not a traditional marinade sauce, but one I created from the inspiring culinary tradition and ingredients of the Yucatan. I suggest celebrating a Meatless Monday (or Friday) by marinating one of blue deer product’s [https://www.facebook.com/bluedeerfood/] seitan meat substitutes (milanesa shown in the picture), or use some hearty oyster mushrooms or portobello.

However, this marinade will work for any plant or animal protein you choose.

Salt and pepper (to taste)

Chop the Roma tomatoes into 4 pieces and add to a blender. Measure and add the achiote pastes, sour orange juice, and parsley. Peel the garlic and add it to the blender as well with any of the optional ingredients. Blend by pulsing until the tomatoes release their juices, and then blend another minute or two until very smooth. You should not any water in this recipe.

Marinate your protein of choice for at least 2 hours up to overnight and then cook the protein as desired. The vegan milanesa and mushrooms pictured were pan-fried in a little bit of oil until brown.

For more of her articles go here: https://nikofthyme.com/

Secrets From The Yucatecan Kitchen:

Today we are going to learn to cook with Yucatan’s famous red achiote paste and oddly bumpy but delicious bitter oranges. These are two ingredients a Yucatecan Kitchen could not survive without. I’ve learned they are not only delicious but two highly nutritious foods.

Achiote - Axiote is one of the most overlooked spices when foreigners enter the Yucetan kitchen because it is a deep red paste and no one knows how or when or where to use it. Most avoid axiote all together, so what is it anyway? Axiote is called Annatto or the Lipstick tree and it was quite literally used for lipstick coloring most of its history. The bush has spread throughout the world for its use in beauty products, food coloring and even hair dye. However, it is a noble plant used in Latin American cooking and it is used to season fish, meats and the notable cochinita pibil known throughout the Yucatan.