A couple of months ago, I showed up at Merida’s newest speakeasy. Some friends and I were told to come check it out so we headed down Calle 53 to go try and find it. We came to an empty taqueria with old diner booths and a glowing trompo of carne al pastor and were told to head to the back of the place and through the freezer door. We looked at each other shrugged walked towards the door and went in. It opened up to what looks like a bookshelf, that was then opened for us as it was a secret door into the underground jazz club. As we went in we saw a cool bar reminiscent of a 1920’s prohibition movie scene. The light was dim and there was a small bar with mirrored shelves and bottles lining the backdrop. The back room was set up with microphones, a cello and saxophone. The place fits no more than 30 people, the vibe intimate and friendly.

I ordered a gin and tonic, as one does when they go to a 20’s style Speakeasy. It seemed fitting. I was pleasantly surprised by how flavorful the gin was, yet I couldn’t pinpoint the flavors. I commented on the unique and smooth taste to the guy sitting next to me, Roberto Brinkman, he looked at me, smiled and said: I am the owner of this Speakeasy and the distiller of the gin you are drinking. It’s called Katun Gin. 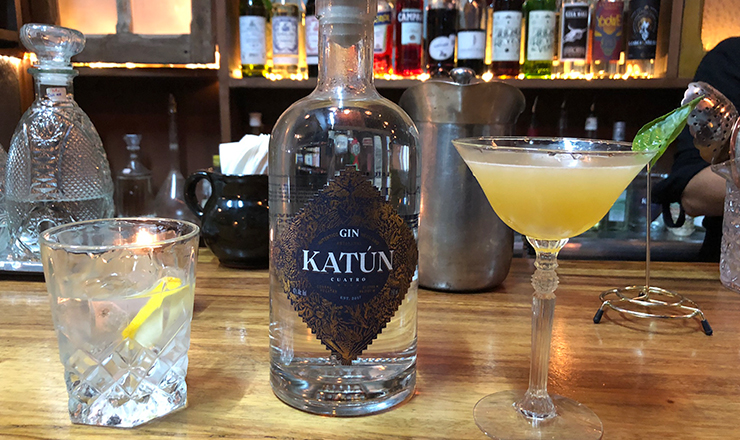 Of course, my inquisitive mind had to know everything about it. Roberto is originally from Mexico City and is a master spirits distiller and is one of the owners of the brand Bruxo mezcal, the third most popular brand of mezcal in Mexico known for its excellence. However,  because mother's side of the family is originally from  Merida, he decided to move out here and start up a Mexican gin distillery with his partners Augusto Voges and Cristian Voges from Yucatan and Raul Alavez from Mexico City. He prides himself on his Mexican heritage and loves to make spirits with definite distinctions that make his alcohol burst with the exotic and colorful flavors of Mexico. That is one of the reasons he chose to distill gin, it is a spirit that you can easily add ingredients to without taking away from the essence of the unique juniper flavor.

Brinkman established his distillery in the quiet pueblo of Conkal just outside of Merida. He is the only one in Yucatan to distill gin and has imported a beautiful copper still and it is there where he makes his magic happen. We headed out last Saturday with Roberto and his sweet dog Vaca to take a tour of his distillery and to learn about the process of making Katun Gin. He and his team came up with 17 botanicals many used in the traditional dishes of Yucatan: chile habanero, chile xcatic, chile pais, china lima, lima yucateca, achiote, pimienta de Tabasco, cardamom, coriander seeds, rosemary, basil, vanilla, juniper and a few other hidden additions which makes an explosion of flavors.

They use neutral corn alcohol as the base and steep the herbs and botanicals in the alcohol for 10 days during the process of maceration. Next it is ready to be transferred and then distilled in the marvelous copper still--which looks like a huge copper smoking pipe of sorts, one of the coolest apparatuses I’ve seen in a long time! It takes between 4-5 hours to distill. The liquid that comes out is pure 80 proof gin. He then sends his gin to another company who is in charge of reducing the percentage of alcohol to 40 percent. They then bottle and label it and voila--you have Katun Gin.

He distills his gin twelve days out of the month and in one day from the six hour process of distilling he gets one hundred and fifty bottles of gin. They export to England, the US, and Australia as well as distribute throughout Mexico. You can find their gin in several bars around town and as of August 16th they are in 6 Sorianas in Merida and will soon be in Kobi.

Gin enthusiasts can also buy Katun at the Speakeasy bar which has the widest selection of Mexican distilled spirits. It is the only bar in Merida to serve exclusively Mexican alcohol and it took them a lot of time and effort to cure the bar and collect all Mexican produced spirits. There are many different types of alcohols that are distilled in Mexico besides just Tequila and Mezcal such as raicillas, pulque, soltoles that are very good.  Of course, they use some liqueurs and mixers not made in Mexico to use for cocktails, but the pure distilled spirits are 100% Mexican which makes this bar very unique and definitely put on your list of places to check out. They also have live jazz jams from talented jazz musicians in town on Tuesdays and Thursdays. The ambiance is chill and super welcoming.

When I asked Roberto what his favorite Katun cocktail is he told us three: Negroni and Katun, Bees Knees Katun with lime juice and honey, and Katun tonic. He says Katun and tonic is the best way to try his gin because you can taste all the flavors of the botanicals. He chuckles a bit as he recalls how his friends describe the unique taste of Katun: “I’ve been told that when you drink Katun on the rocks it’s like drinking water from the cenote”. And he hit it right on the nail. That was exactly what it was when I first tried Katun, I was drinking the essence of Yucatan, the essence of cenotes right from in my 20’s vintage gin glass while listening to live jazz in the background.

“When you drink Katun on the rocks it’s like drinking water from the cenote.”​