Andrea, along with the organization’s other co-founder, Rodrigo Navarro, joined forces to officially form Miel Nativa in February 2019. This Yucatán-based social enterprise works side-by-side with local Mayan stingless bee honey producers, assisting with the sustainable management of bees and hives, and in the fairtrade sale of honey.

In co-founding her current venture with Miel Nativa, she said her and Rodrigo had three pillars in mind: Learn, Contribute and Honor. One of the ways they execute the first pillar of learning is through the Stingless Bee Honey Tasting (+Much More) offered in Mérida. And yes — some bees, including the Yucatán’s Melipona beecheii — don’t sting!

During this two-hour, multisensory experience, guests learn about bees in general, and the importance that both bees and honey have to the Mayans, from being a medicinal and food source, to the sociocultural relationship between the humans and the bees. Attendees will also see some of the myriad of colors of honey can come in — and of course, sample different varieties of honeys.

The tasting consists of at least seven types of honey, all with different flavor profiles and color hues. Each honey from the tasting is produced locally in the Yucatán, some at only 100 milliliters per year, and not available for sale anywhere.

Because of these small production amounts, the types of honey in each tasting will vary, but there will always a sampling of at least four different stingless bee honeys, including honey from the Melipona beecheii bee.

Melipona beecheii bees are the most important in the Yucatán. The honey from this stingless bee variety has been a staple of the Mayan diet for thousands of years. It was the primary sweetener in foods before the introduction of sugarcane to Mexico about 500 years ago.

These bees produce only about 1.5 liters of honey per hive per year, versus a typical honeybee hive which produces about 70. Chefs, researchers and cosmetic companies alike have in recent years sought out Melipona beecheii honey for everything from dessert ingredients to making exfoliant facial scrubs.

This low production yield, combined with the global loss of bees and their natural habitats, makes Melipona beecheii honey an increasingly rare commodity.

“One of the reasons we started the project is because the demand for Melipona beecheii honey has gone up,” said Andrea on the founding of Miel Nativa.

Andrea and Rodrigo’s work before and since co-founding Miel Nativa has made them experts on Yucatán bees and honeys, even leading them to appear in the third episode of the four-part Netflix documentary entitled Salt Fat Acid Heat.

The episode is all about how acidic flavors are used in cooking, and brings the show’s host, Chef/Author Samin Nosrat, to the Yucatán. While in the peninsula, she examines the culinary importance of the naranja agria (sour orange), highlights the harvesting of Melipona beecheii honey, and more.

Melipona beecheii honey has a more citrusy flavor profile than nearly all mass-produced honeys. Since many consumers are only accustomed to conventional, one-note honey, participants in Miel Nativa’s tasting are rarely expecting such an acidic and sour taste.

“I like to think of honey as wine,” Andrea said. “Honey can be as complex as wine, but we don’t know it in that way.”

In addition to the expected sweet honey taste, and the sour/acidic Melipona beecheii honey, some of the other flavor profiles a guest might sample during the tasting experience include floral, fermented, vegetal and smoky.

Not only is the taste of this honey unique, but the Melipona beecheii is a unique type of bee because it does not sting. Of the 20,000 total registered species of bees in the world, only about 450 are stingless. Of these 450 stingless bees, just 17 are found in the Yucatán.

Out of the 17 Yucatán stingless species, Melipona beecheii (Xunan kaab in Mayan, which roughly to “regal lady bee”) is the most sought after because of its healing properties. It has been used since ancient times by Mayans to slow the growth of glaucoma, treat respiratory diseases, strengthen the immune system, superficially heal wounds and burns, and more.

The Universidad Tecnológica Metropolitana in Mérida has even been conducting studies to see just how many medicinal functions this honey actually has. Researchers, there are also conducting studies on other types of stingless bees honey, of which close to nothing is currently known. While honey is still seen an alternative or holistic medicinal treatment, Western medicine does seem to be in agreement that honey is a superfood rich in several important antioxidants, including polyphenols and flavonoids, which may fight off disease-causing free radicals.

Besides being coveted for its medical uses, the Mayans have an even deeper connection to honey — and to the bee itself.  “It’s amazing how close the relationship between bees and the Mayans was,” Andrea said. “When you go to the older Mayan communities, they know the species by name; not just as ‘bee.’ ”

In centuries past, Mayan priests presided over honey harvests in religious ceremonies. For them, honey was not only important medicinally and for sustenance, but also a vital part of the economy as a principal trade product.  The 112-page (ca. 900-1521 AD), one of only three surviving Mayan codices, depicts everything from rituals to invoke rainfall to everyday activities including hunting and beekeeping. In the section of the book covering beekeeping practices, there are also depictions of the Mayan bee god Ah Muken Kaab.  Ah Muken Kaab, meaning “the one who keeps honey” in Mayan, can be recognized in Mayan art and statues by having the outstretched wings of a bee, likely in the process of either landing or about to ascend. Because of this, scholars believe the Descending God, postured near-identically, was also the bee god Ah Muken Kaab.

The Descending God is a central god in the Mayan pantheon. Depictions of this bee god have been found in many of the remaining structures at the famous Tulum ruins archeological site, including at the Temple of the Descending God.  The Mayan word for honey, kaab, also means “world,” leading some scholars to deduce Ah Muken Kaab was also linked to the creation of the world for the Mayans.

The next phase of advancement for Miel Nativa will be the opening of a shop in Centro, slated for late-October or early-November of this year. The space will not only have local Yucatán honeys for sale, but also serve as an educational space to host classes and workshops.

Most photos by Shelly Marmor

What Is Honey? Miel Nativa Aims to Educate About this Sweet Superfood 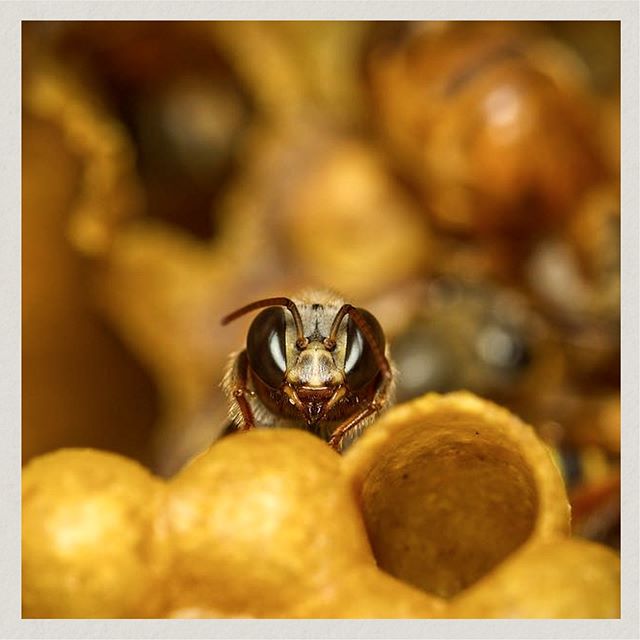 With 20,000 species of bees, and honey a staple superfood on six of the Earth’s seven continents, “What is honey?” is a very interesting question — and one regular consumers likely don’t know the answer to.

“We live in a world with so much access to food,” said Miel Nativa Co-Founder Andrea Figueroa. “We rarely ask where it comes from, or what it is that we are putting in our mouths!”

To give a short answer to this question, honey is essentially the sweet byproduct that results from the extraction of sugary flower nectar, combined with enzymes found in the bees’ saliva. After this combination is ultimately secreted and capped off with beeswax, the resulting low-moisture environment allows for the conversion into honey. The mixture will take about 15 days before it is ready to harvest as honey.